November 03, 2009
So we have been hit with a Double whammy on  the Melbourne  cup day  , thanks to  Shocking and the RBA.


SHOCKING RESULT FOR MELBOURE CUP FOR MANY

First we  all lose our money to shocking  as it made a grand mark in the Melbourne cup 2009 by leaving all the other favorites behind to eat its dust. None of the favorites VIEWED , ALCOPOP , Roman Emperor  Was anyway close by to be seen while   SHOCKING made a run for its glory on the finish line. 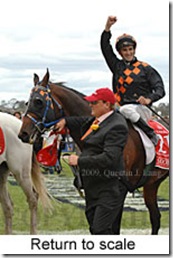 Crime scene did a good job taking  in  second place by a whisker after shocking. It was shocking new to many  as non of the favorites   won and many  punters  disappointed .. but leaving the bookies laughing.

To add to our misery The RBA went ahead and did a 25 basis point rate cut today   and   thus  be ready to see even more money  going out from your bank account if  you hold a mortgage
As was widely expected by economists, the Reserve Bank board lifted the cash rate by 25 basis points to 3.5 per cent. Mr Swan says Australians should expect rate increases as the economy recovers from the global financial crisis.


WESTPAC has matched the central bank, increasing its standard variable mortgage interest rate by 25 basis points.
The bank's standard variable home loan rate will rise to 6.31 per cent as of Friday November 6, from 6.06 per cent, Sydney-based Westpac said in a statement on Tuesday.