Australian shares fell for an 11th day, extending the longest sell-off in a quarter of a century. National Australia Bank Ltd. led declines after a $150 billion economic plan

Allco Finance Group Ltd. posted the benchmark’s biggest drop. Rio Tinto Group tumbled the most in more than 10 years after bigger rival BHP Billiton Ltd. failed to make a new offer for the company and

a newspaper reported it may not do so before a Feb. 6 deadline.

Allco Finance Group Ltd., an Australian manager of assets including ships and aircraft, posted a record fall in Sydney trading as investors avoided stocks perceived to have high debt and complex corporate structures.

The stock fell 35 percent to A$3.10 at the close of trading the Australian Stock Exchange, cutting the Sydney-based company’s market value to A$1.14 billion ($998 million).

Investors are concerned Allco, a stakeholder in at least five listed investment funds that carry its n

ame, may be headed for the same fate as Centro Properties Group and MFS Ltd., which have seen their share prices slump as they struggle to refinance debt. Allco and its subsidiaries have A$1.075 billion of bonds and loans due this year and a further A$1.28 billion maturing in 2009, according to Bloomberg data.

“With MFS going down, people are looking for the next thing that might hit trouble and they are backing it to be Allco,” said Michael Birch, who helps manage the equivalent of $140 million at Wallace Funds Management in Sydney. “It’s a jittery market Allco was not able to explain why it shares declined so much and has kept the market informed of developments at the company, it said in a statement to the exchange.

Centro, based in Melbourne, has lost more than 90 percent of its value since Dec. 17 after announcing it was struggling to refinance A$3.9 billion debt because of the collapse in the subprime mortgage market.

MFS slumped 69 percent on Jan. 18 after announcing plans to sell new stock to cut debt accumulated by Michael King as he doubled the assets of the Southport, Queensland-based company in the past two years through acquisitions. King resigned today as Chief Executive Officer.

The result was up nearly 4 per cent quarter-on-quarter and was double the sales volume that the local subsidiary turned over a year ago, Australia and New Zealand managing director Deepak Nangia said.

Asian stocks declined, driving the regional benchmark to a five-month low, on concern the U.S. will enter a recession and slow global growth.

Commonwealth Bank of Australia and National Australia Bank Ltd. dropped after Morgan Stanley said loan losses at the country’s banks will increase. Bank of China Ltd. slumped after BNP Paribas SA said it may have to write down the value of overseas securities by $4.8 billion. Hyundai Heavy Industries Co. fell to the lowest since August on concern new orders will drop. 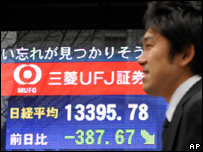 agion effect,” said Pankaj Kumar, who manages about $460 million as chief investment officer at Kurnia Insurans Bhd. in Petaling Jaya, near Kuala Lumpur. “Investors may be looking again at their portfolios and reducing their exposure.”

The MSCI Asia Pacific Index lost 3.2 percent to 142.11 at 3:33 p.m. in Tokyo, heading for its lowest close since Aug. 20. More than five stocks declined for each that advanced, and all 10 industry groups fell. Asian benchmarks retreated apart from Thailand, Pakistan and Sri Lanka.

Japan’s Nikkei 225 Stock Average dropped 3.9 percent to 13,325.94, the lowest since Oct. 25, 2005. The Finance Ministry cut its evaluation of five of Japan’s 11 regional economies as housing investment fell and employment worsened.

Australia’s S&P/ASX 200 Index slumped 2.9 percent, extending the longest sell-off in a quarter of a century. Rio Tinto Group, the world’s third-largest mining company, tumbled the most in 10 years after rival BHP Billiton Ltd. failed to make a new offer.

Hong Kong’s Hang Seng Index lost 2.8 percent, taking its decline from its Oct. 30 high to 23 percent. Air China Ltd., the world’s largest carrier by market value, dropped 10 percent to HK$8.86, the most since Sept. 25, after its approach to buy a stake in China Eastern Airlines Corp. was snubbed.

A proposed economic stimulus package by U.S. President George W. Bush of as much as $150 billion failed to lift recession concerns. U.S. equities fell, reversing gains, after Bush’s plan was announced on Jan. 18, with the Standard & Poor’s 500 Index completing its worst weekly decline in five years.

Morgan Stanley raised its 2008 forecast for loan loss charges at the country’s major banks by 26 percent, analyst Richard Wiles said in a note today, citing a deteriorating global economy and “the difficulty faced by some companies in refinancing maturing debt.”

Bank of China, which has the largest holdings among Asian banks of U.S. subprime mortgages, slid 4.7 percent to HK$3.43. The bank may write down 17.5 billion yuan ($2.4 billion) for the fourth quarter of 2007, and an equal amount for this year, Dorris Chen, a Shanghai-based analyst at BNP Paribas wrote in a note on Jan. 18.

The bank has dropped 30 percent since Oct. 30, when it reported profit growth that trailed competitors because of losses on its $7.95 billion of subprime-related investments.

“That BOC only provisioned $473 million for $7.95 billion subprime exposure is far from comforting,” Chen said.

Allco Finance Group Ltd., an Australian manager of assets including investments in at least five listed funds, slumped 35 percent to A$3.10.

“The best thing to do is to stay away from banks with complicated investments,” said James Chua, who helps oversee $450 million at Phillip Capital Management in Singapore. “Why make your life any more difficult?”

Rio Tinto, defending a hostile $108 billion takeover bid, declined 7.9 percent to A$114.25, the lowest close since Nov. 8, after BHP didn’t make a new offer. BHP may not make a new offer before the Feb. 6 deadline set by the U.K.’s Takeover Panel, the London-based Times newspaper reported Jan. 19. BHP, the world’s largest mining company, slid 4.3 percent to A$33.29.

Elpida, Japan’s largest maker of computer chips, gained 4.3 percent to 3,610 yen, the biggest percentage gainer on the MSCI World Index. Mizuho Securities Co. analyst Eisaku Ohmori raised his rating on the stock to “buy” from “hold,” citing expectations a supply glut in the industry will ease.

Shares in agribusiness companies are holding up, despite massive losses on the Australian stock market in recent days.

Since the start of January, the All Ordinaries Index has fallen 10 per cent, while Australian agri-stocks have dropped only four.

Director of the Australian Agribusiness Group, Tim Lee, says agriculture is not as vulnerable as other sectors, particularly when food prices continue to rise.

“Agriculture tends not to be driven by, or certainly not driven by the stock market,” he says.

“If the stock market is falling or rising, crops in the ground don’t know that and they still keep growing, so there’s a real inherent risk management built into the agricultural sector”.