Skip to content
May 9, 2013 dmnhub Leave a comment
Our spotlight is on the backdoor listing of moboom with AACL holdings this month which falls under our speculative buy. Speculative as it a  general website company  that  is finding its way in a competitive  niche with players already present in this niche. The final method of acquisition and the structure of the Proposed Transaction with AACL and moboom  is subject to further discussions and advice.

Takeovers and mergers | AACL and Moboom

At this price $0.020 its as a speculative buy with  the moboom backdoor listing , worth a look if you  follow the technology sector specifically  with website development. I would give it  a 50/50 chance  of making some money  in their next profit reporting season 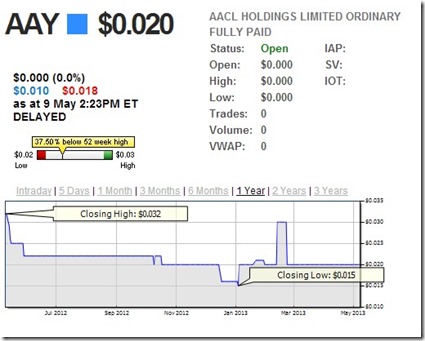 What is a back door listing?

A back door listing, sometimes referred to as a reverse takeover, reverse merger, or reverse IPO, occurs when a privately-held company that may not qualify for the public offering process purchases a publicly-traded company.

Moboom is a technology company that has developed proprietary technology to enable the creation of responsive websites that work on any device from mobile phones through to tablets like ipads  and  and PCs. The company has already several leading Australian and Asian publishers and media groups as customers and is planning expansion into European and US markets in coming months. The company is headquartered in Perth, Australia and has a development office in San Francisco, USA.
Negatives for Moboom
Most other  website or  website theme providers  have caught on already with  the new wave of  eyeballs coming to their  websites from smartphones  and tablets  and there are many players in the website market  who are  providing this product at competitive price , however  moboom also has the advantage of  providing extras wit their product that is well integrated  in one package like ( Integrated Google Analytics, social ( FACEBOOK , Twitter  etc) integration , and Unlimited bandwidth )

UNON-BINDING HEADS OF AGREEMENT EXECUTED WITH MOBOOM LIMITED (MOBOOM) AACL Holdings Limited (AACL) is pleased to announce that it has executed a non-binding Heads of Agreement with mobile web developer and mobile solution provider Moboom, that sets out a proposed acquisition by AACL of all of the issued shares in Moboom, in consideration for the issue of AACL ordinary shares to Moboom shareholders (Proposed Transaction).  The Heads of Agreement is non-binding, incomplete and indicative, except in respect of confidentiality obligations.  The Proposed Transaction will include an equity raising for the purposes of funding the working capital requirements of the enlarged entity.

As reported from AACL website
“As reported to the ASX, AACL Holdings Limited sold its main operating business to Glencore for approximately A$8.5M with settlement on the 15th October 2012.
The board is now looking for a transactions/business to vend into AACL to maximise shareholder wealth.”