The wheat on Colin Weise’s 513-hectare property near the town of Lockhart in Australia’s south-east is ripening to a biscuit brown.

"It’s the wonder crop. If they were weeds, they’d be dead," he said approvingly. 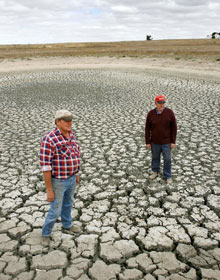 The crop has received hardly any rain this year and in October it should be tall, heavy and dark green rather than knee-high, feathery and fawn.

In the midst of the worst drought on record, grain growers like Weise are glad to get any sort of harvest at all. It’s been dry since 2002 and what constitutes a good crop has changed in definition.

One in six of the nation’s 130,000 farmers is receiving government support. It’s called Exceptional Circumstances drought relief and it’s costing the taxpayer 2 million Australian dollars (1.4 million US dollars) a week.

A likely change is that farmers will be lent money, rather than given grants, and be obliged to repay the money when they get good harvests. There would be grants, but these would be for initiatives to drought-proof farms like lining irrigation ditches to conserve water. James Stacey, an Adelaide dairy farmer, says sentimentality has no place in the disbursement of public funds. He would welcome funding being tied to progress in achieving sustainability.

"I just think with some farmers the writing is on the wall and they should get the message," Stacey said. "At the end of the day, we are just another small business."

Weise marvels at how advances in technology have been reflected in better yields even in bad years.

The soil isn’t ploughed any more; seeds are drilled into the ground in rows made straight by tractor-mounted global positioning systems. After harvests, fields are not given over to weeds in order to preserve soil moisture until the planting season. Crop rotation, once a chancy business, is now determined by sophisticated soil testing techniques.

Within 10 years Australian farmers could be planting the world’s first transgenic wheat seeds – drought-resistant strains that could raise yields by 20 per cent.

"To see genetic innovation in a major crop like wheat for drought is very exciting," said German Spangenberg, a biotechnologist at Melbourne’s La Trobe University, who is leading the research.