The Indian  stock trader authority  had to halt trading  twice today  as stocks were spiraling  out of control on the poll news of congress winning a landslide victory. that definitely took away a lot of uncertainty for the Indian stock market.

And that amount is a lot in indian money

Investor wealth, measured in terms of the combined market capitalisation of all the listed companies, increased by over Rs 6,56,477 crore in a minute — in the first 30 seconds and then after the resumption of trading at 1155 hours — to Rs 44,63,420.97 crore.

Here’s a snap shot of my  Indian portfolio 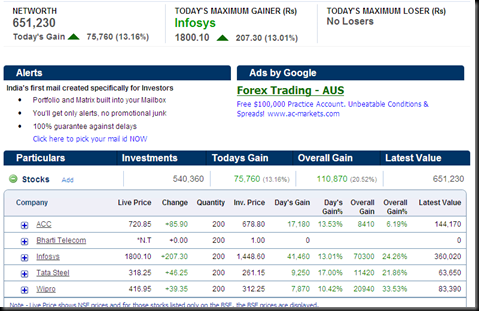 Markets have stopped trading for the day as the benchmarks hit another upper circuit Monday as soon as the trade resumed after 2 hour break. Investors are are euphoric after the United Progressive Alliance emerged victorious in the 2009 general elections. ( Watch )

Market experts views:
“Markets had previously worried that gains by leftist and smaller regional parties would weigh on the reform agenda and lead to a further blow-out in the already large fiscal deficit. In previous elections, both BJP- and Congress-led alliances had been unable to push through reforms, held down by allies with their own agendas. The government’s rural jobs program and strong private sector investment have highlighted the positive effects of economic reform and liberalisation, and voters’ shunning of smaller parties imply a desire for greater action on the reform front,” said a Moody’s Economy.com report