The market lost $25 billion today, reflecting more than a 2 per cent drop in New York on Friday.

On the Sydney Futures Exchange, the September share price index contract lost 89 points to 5887 on a volume of 17,254 contracts.

CommSec chief equities economist Craig James says the market is likely to be volatile for some time.

US markets in turmoil

US equity markets ended in turmoil on Friday, after a senior executive of mortgage underwriter Bear Stearns said that the “fixed income market turmoil was the worst in 22 years”.
US data also was on the weak side, with jobs figures fanning worries about the strength of the economy.

“Investors are still unsure how many skeletons there are in the closet in the US sub-prime mortgage market,” he said.

“Until they get certainty about the state of that market then we are going to see further jitters.

“We certainly saw that in terms of the Australian share market today, down in the order of 1.75 per cent.”

It was a bad day for the banks.

Australia’s biggest investment bank, Macquarie Bank, continued to be dragged down by concerns over the mortgage market in the United States.

Global investment company Babcock and Brown dropped about 4 per cent to $24.02.

The other major banks also dropped in value amid speculation the Reserve Bank will raise interest rates on Wednesday.

In the resources sector, lower oil and base metals prices pulled down the big miners. 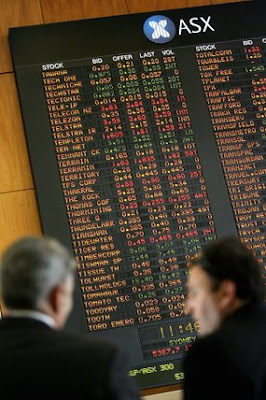 The Australian dollar was buying 85.53 US cents just after 5:00pm AEST.

“There is still a focus with sub-prime issues and the uncertainty there is really knocking around the investment banks,” he said.
“Macquarie, Babcock and Alcoa are all suffering.
“The miners are falling also. (They) are exposed to global growth (where) there are concerns about the US economy (which are) finally catching up with them.”