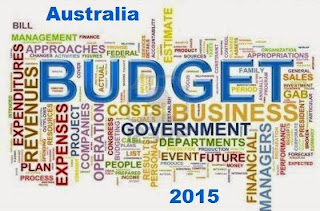 The budget for 2015 in Australia is out , with tv channels, Property investors, Businessmen and the general public waiting with anxiousness to see what it brings. There is no doubt about it there is a deficit in the Australian economy, but its yet to be seen how this budget has been affected by the declining prices of the Iron ore industry and the doom and gloom climate in the oil and gas industry.

Australia’s conservative government assumes the price of iron ore, the country’s largest export, will average $US48 a ton in 2015-16, well below the $US60-per-ton estimate given late last year. The iron-ore price has collapsed to around $US55 per ton currently, down from a peak of $US185 per ton in 2011. The price hit a recent low of $US43 per ton in April.

Below are the links you will need to get a full bottle on all the budget news you can eat!

Delivered on 12 May 2015 by
The Honourable J. B. Hockey MP
Treasurer of the Commonwealth of Australia
Link here – http://www.budget.gov.au/2015-16/content/speech/html/speech.htm

To give you one example, around 1,000 people will now benefit each year from subsidised access to better treatments for certain types of melanoma. Some of these treatments have until now, cost up to $131,000 per course of therapy. Now they are accessible for all Australians.
The Age Pension will continue to increase, twice a year, this year, and every year — at the highest available indexation rate.
New $212 million Youth Transition to Work programme that will fund community workers, on the ground, in high youth unemployment areas.
$5 billion Northern Australia Infrastructure Facility which is the first major step in our plan for our great North.
NEWS + summaries from other media outlets & newspapers
Budget 2015: Joe Hockey delivers billions for small business, cracks down on welfare from http://www.abc.net.au/

– Joe Hockey pledges $5.5 billion for small businesses in second budget
– Small businesses get immediate 100% tax write off for assets costing less than $20,000
– Budget deficit doubles to $35 billion in 2015-16; deficit to fall to $7 billion by 2018-19
– Mining sector’s contribution to economy slumps from 45% to 16% over next three years
– Crackdown on welfare fraud claws back $1.7 billion over forward estimates
– $1.2 billion for national security, including fight against Islamic State
– $300 million put aside for farmers battling drought
– No more tax-free working holidays for foreigners

From http://www.smh.com.au/business/federal-budget-2015
Winners
· Jobseekers over 50: Employers will receive up to $10,000 over 12 months, up from 2 years in the previous budget if they hire and keep an older worker.

· Widows: $900,000 over four years to exclude people who get the Widow Allowance from a one-week waiting period
Losers
· Welfare system defrauders: $1.7 billion saved from increased fraud prevention and debt recovery.
· Rich pensioners: $2.4 billion saved over five years by increasing asset test threshold and taper rate for the pension.
From
http://www2.deloitte.com/

Thermal coal was tipped by the budget to average $US60 per tonne over the next year, compared with the current price for Newcastle thermal coal of $US63 per tonne, excluding shipping costs.
Alan kohler in a TV interview on budget day  indicated that the price fall was majorly due to influx of iron ore  from irons majors Rio tinto and BHP etc  who have brought down prices – making it  tougher  for chinese iron ore producers. In the process  a few smaller australlian miners are in trouble