Galaxy Resources Ltd (ASX: GXY) (“Galaxy”  or  “the Company”) confirms it has been advised by East China Mineral Exploration & Development Bureau (“ECE”) that its Board has withdrawn from ECE’s proposed investment in Galaxy . 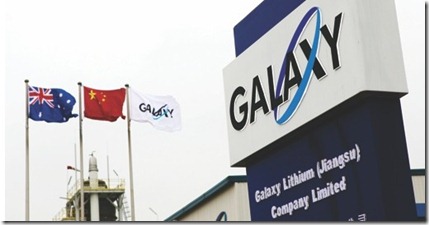 Galaxy today confirmed it had been advised by ECE that its board has withdrawn its proposed investment, which would have been through the subscription of 132.4 million shares at 50c each. The placement would have delivered ECE a 19.8 per cent stake in Galaxy.

The investment was unveiled in November last year, weeks before Galaxy announced that an employee had passed away from injuries sustained from a blast at the Jiangsu plant.

Galaxy Resources Ltd (“Galaxy”) is an Australian-based global lithium company with lithium production facilities, hard rock mines and brine assets in Australia, China, Canada and Argentina. The Company is an integrated lithium mining, chemicals and battery company listed on the Australian
Securities Exchange (Code: GXY) and is a member of the S&P/ASX 300 Index.
Galaxy wholly owns the Mt Cattlin project near Ravensthorpe in Western Australia where it mines lithium pegmatite  and at full capacity, Galaxy will process 137,000 tpa of spodumene concentrate.

(announced to ASX on 5 November 2012). ECE  has indicated to Galaxy it is willing to re-consider the investment when Galaxy’s Jiangsu Lithium Carbonate Plant (“Jiangsu Plant”) in China returns to stable operation.

Lithium compounds are used in the manufacture of ceramics, glass, electronics and are an essential cathode material for long life lithium-ion batteries
used to power e-bikes and hybrid and electric vehicles. Galaxy is bullish about the global lithium demand outlook and is positioning itself to achieve its
goal of being involved in every step of the lithium supply chain.

Galaxy also reports that it has settled the first tranche of  an A$20 million (before costs) financing arrangement with Deutsche Bank, comprising equity placement and call option transactions.

The Jiangsu Plant is on track to recommence operations in early February 2013. Galaxy is continuing discussions with potential strategic investors and will keep the market informed of their progress