Australians are switching from credit to debit cards as they avoid extra debt in a new era of fiscal conservatism. The value of purchases and cash advances on credit and charge cards fell 1.4 per cent to  $19.139 billion in July compared with the month before, data from the Reserve Bank revealed today. 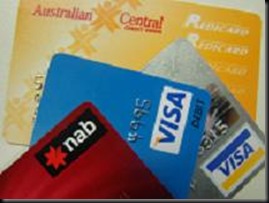 Bank statistics show credit cards are being payed off at the fastest rate on record.The figures show the average credit card balance stood at $3,100 dollars in July.That is 0.6 per cent lower than a year ago.

However, the data shows the rate at which credit card debt is accumulating is slowing.

CommSec’s Chief Economist, Craig James, says it is the fastest decline since records began 14 years ago. "Household finances are in good shape, people have gained from the fact that taxes have been cut income levels have been rising and interest rates have been falling, but they’re using that extra cash to pay off credit card debt," he said.

"And if they’re going to make any purchases they tend to use debit cards rather than credit cards." The figures also show Australian banks are weathering the financial crisis well, but still have some way to go to completely mend their balance sheets.