Weak manufacturing data coming in from the US and protests in Greece, as euro-zone finance ministers failed to agree on a second bailout package for the debt-laden nation, set a negative tone for the local market in australia. 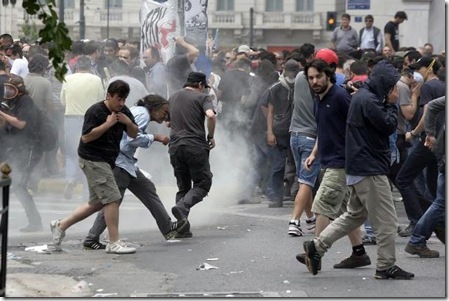 The Australian dollar was caught up in the negative sentiment, falling to $US1.0526, down from $US1.0688 on yesterday’s close.

In Asia, the major markets of Hong Kong, Tokyo and Shanghai were down by more than 1 per cent. Some analysts said the approaching end of the financial year exacerbated today’s losses.

"There is no institutional buying in the Australian market at the moment as it’s only 10 trading days before June 30 so they can’t put anything into their funds, they’re all closed," said E.L. & C. Baillieu Stockbroking head analyst Ivor Ries.  The northern hemisphere is on holiday, they’re not opening any new long positions, and Australians can’t buy. So  a lot of the normal buying power in the market is out at the moment," he said.

The Indian stock market again moved into the red during the previous two hours of trade. The BSE-Sensexis trading down by 102 points, while NSE-Nifty is trading 34 points below the dotted line. The BSE Midcap and BSE Small cap indices are down by 0.7% and 0.4% respectively.