The Australian and New Zealand dollars gained for an 11th day, the longest winning streak since at least July 2007, as a U.S. plan to rid banks of toxic assets boosted speculation the global recession may abate.

The currencies touched the strongest in four months against the yen as Asian stocks extended a global rally, taking the MSCI World Index to a five-week high on U.S. plans to fund purchases of as much as $1 trillion in illiquid real-estate assets. New Zealand’s currency pared gains against the dollar as Finance Minister Bill English said the nation faces “chronic” budget and current-account deficits. 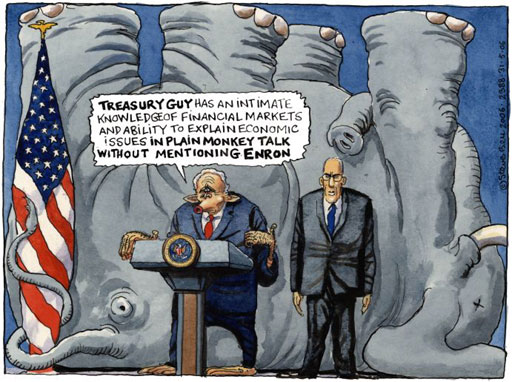 After the Treasury Department released its plan today to rid banks of so-called "toxic assets" by enticing private investors to partner with the government, Paul Solman answered questions on the basics of the plan.

What exactly are toxic assets and why is it so crucial for banks to get them off their books?

Paul Solman: A bank’s loans are its main assets: what it owns and makes money on by charging interest. "Toxic" assets are simply bad loans – VERY bad loans in that, as their name implies, not only can’t a bank expect to get any interest, but even retrieving the principal is a stretch.

You’re a bank. You have some money of your own from investors: your grubstake, aka your "capital." You then take in deposits at one interest rate and lend them out at a higher rate. Those loans are your assets, on which you make money. That all you to function as a business. By law, you need a capital cushion of 10 percent to cover any losses. (Obviously, the higher the cushion, the less you can lend out, the less you can make.) So what happens when your loans go "toxic"? Well, first you have a "loan loss reserve" account. But what happens if more loans go bad than you’ve provided for?

The toxic assets then start eating into your capital. And if more than 10 percent of the loans go toxic – poof! – your capital cushion is out of feathers. You’re bankrupt.

If, on the other hand, you can get the loans off your books by unloading them, your capital ratio is restored and you can go back to making money the old-fashioned way: one non-toxic loan at a time.

Why does the government need private investors for this plan? Why can’t it go it alone?

Paul Solman: The government can go it alone. It just doesn’t want to. This is a new administration, still not nearly staffed up, especially at Treasury. One can imagine its reluctance to take over and run a broken banking system. That’s not to say I think they’re right, just that I sympathize. Would you want to run Citigroup at this point? Wouldn’t you have enough headaches?

Who might these private investors be and what are they getting out of the plan?

Paul Solman: People with lots and lots of money — sophisticated investors. Hedge funds (private pools of capital). Sovereign wealth funds, I suppose (pools of capital from the governments of other countries). Other major financial players like pension funds or even me, say, if I win the Hyperbucks lottery (or whatever it’s called).

What do these investors get? A lot of U.S. government money and guarantees (as much as 95 percent) to help make their investments far safer than they’d otherwise be, in return for sharing the potential profits.

The government says there will competitive auctions for these assets. But if no one really wants them, won’t they sell for far below their value?

Paul Solman: What IS their value? That’s the big question. The whole point of this plan is to discover and release that value, in a market that is frozen. The assumption is that, long term, these assets (loans) are worth more than they can sell for at the moment, to the extent they can sell at all.

But of course, the loans may be deemed of very little value once they’re up for auction. In that case, we taxpayers have assumed most of the loss that the banks would otherwise have been stuck with.

But hey, that’s the point, too. If the loans are worthless, then so are the banks that made them. And there seems to be near-consensus on one thing: We can’t afford to let the banks fail, for fear of financial paralysis worldwide. That is, the domino effect we tried to explain many months ago still haunts.
After the AIG outcry and the attempts in DC to clamp down on the activities of financial institutions, will the private sector be reluctant to partner with the government?

Paul Solman: Yup. Wouldn’t you be? But if there’s enough of a carrot… If one certainty has been reinforced by the crisis, it’s that folks on Wall Street sure do care about making a buck.

Is there an upside for taxpayers?

Paul Solman: Yes, several. First and most obvious, the government, and thus we taxpayers, make money if the loans wind up selling for more than we pay for them. Less obvious, but more important: If the plan revives the financial system, which in turn revives the economy, otherwise idle resources – especially the unemployed – will be put back to work, producing output that will benefit us all. Or, at the very least, that will yield revenues the government can tax, thus relieving the tax burden on the rest of us.