Australia released the Henry tax review reform last week which pretty much the whole business community was waiting for with bated breath last week. The implementation of the super tax on miners  from the Henry tax review brought down the  mining shares with a vengeance in the Australian  markets , and the falling Dow Jones didn’t help either.  To put more  momentum to this bad news the Greece  stock market  epidemic which was the flow on from the US  GFC   some years ago  and spooked by the US markets  crisis is still spooking other countries like UK , Portugal , Spain and other euro zone countries which are in very bad debt shape and continuing to grow worse.

It is ironic  that the us markets that started this all has actually been performing an rising pretty well in the last couple of months. One market that has also been gradually rising and performing well after the  GFC  is the Nikkei ( Japan stock market) and  we can certainly take some relief from that , it being one of the major economic players in the global markets.

This is how the Australian stock market looked this week 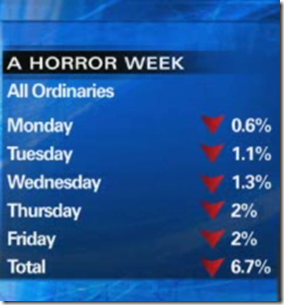 The Super Mining tax ( which is considered a a double mining tax by the big miners in Australia) was the  report that started the  freefall in the  Aus biz markets this week. Check out  the Henry Review tax reform  2010 documents and details here on this blog for details on this mining super tax.